Beautiful to hold, to see, and to read, Leonard Schwartz and Simon Carr’s Salamander updates the bestiary form, throwing off the cloak of human morality with which medieval works covered their subjects in an attempt to see and be seen by animals afresh. This is an ecopoetic exchange—between the artists and between species. In twenty-four playful and subtle poem-woodcut pairings (the introduction reveals that though the poems often preceded Carr’s illustrations, the correspondence went the other way occasionally, and given the work’s poetics, I hesitate to refer to either medium as the accompaniment to the other—set on facing pages, they are clearly meant to be seen and considered simultaneously), Schwartz and Carr use their media to explore, as Schwartz writes, “capture and release,” a phrase that not only describes collaboration’s back and forth, but also suggests their investigation into how much or little can be contained within the frame of the woodcut or the page.

Encompassing creatures quotidian (squirrel, dog) and mythical (an African lion purportedly abandoned in the Olympic mountains), free (orca, whale) and caged (snow monkey I and II), the poems of Salamander are as varied in form as they are in subject. From long lines of prose poetry to comic one-liners (The poem “Racoon” reads, in its entirety, “Raccoons have really, really hard heads”), from elliptical abstraction, to surrealism, to imagism, the work is committed to heterogeneity—manifesting a range that deepens the delight of traversing its pages. The work is also replete with intertextual references to precedent poets like Yeats and Stevens who also trained their gaze on the animal world. Schwartz’s refusal to be contained by a single poetic form stems from the work’s poetics, as he writes in the introduction:

As animals ourselves we try very hard to contain the animal, to seal the animal off: in zoos, in works of art, in disguises, in
slaughterhouses, in coffee pots, in definitions of ourselves that leave out the animal. But in containing the animal we also risk
killing it, immediately or in the long term.

Rather than entrapping animals within a gaze that either fetishizes or dehumanizes them, he writes, “I wanted to imagine another way.” The poetics of “capture and release” is a kind of irrepressibility that manifests in both artists’ refusal to contain their animal subjects. This catch and release goes many ways—from human to human, human to animal, and animal to human. Throughout the collection, animals are not only seen, they also look back, as when a crow spies “doctors in scrubs / All working around a table”; squirrels “tease and tease,” chattering “from the tops of the trees”; and owls “occupy certain dark niches of our common space, from which they regard each movement of the human body with a certain interest one can’t quite call dispassionate.” A deer, shot “with a cross-bow, for getting / Too close to my wife’s garden” does “a double take” before bolting for the woods, leaving the speaker equally “struck / By my own prowess, and my stupidity.” That line break gives the reader a moment to see “struck” as a piercing at once of body and mind, the speaker ashamed at having wounded, perhaps mortally, another animal. Observing us, the subjects of these poems “are mirrors reflecting back / Animals to themselves…/ And other pieties.” Meeting their gaze the speaker feels both identification and separation, guilt for inflicting the wound and the pain of the wound itself.

Elliptical endings like this one recur throughout the collection, subverting the kind of easy closure that makes animals object lessons for human behavior, distorted mirrors of human nature, and subjects of human fantasy or reverence—perspectives that treat animals as fundamentally other. In “Cupid’s Deer,” the speaker and the deer are both animal, and it is unclear who is reflecting whom.

The ellipses in poems like “Rabbit” leave things unfinished, open, and interrupted, allowing them to continue on in imagination:

What is the rabbit’s
Achilles heel, Cleo asks.

In fable it is overconfidence,
In morality plays being oversexed.


If the everyday is the ground of the unique

The poem invites the reader to fill in what might result from this “leap” into a world beyond fable and morality play—what then follows this if? When we look beyond the familiar, it suggests, the “everyday” rabbit becomes “unique,” a “possible hare,” with its own individual Achilles heel. The internal rhyme of habit and rabbit sonically enacts the leap of both skill and soma, conjuring a body that bounds beyond the poem’s borders.

Likewise, Carr’s woodblock prints feature heavy black frames suggestive of the boxes into which we fit our images of other creatures, but in some cases, the animals refuse to be hemmed in by this boundary and cross their frames (as in the raccoon, owl, blonde raven, and salamander), playing with the two-dimensionality of the image. 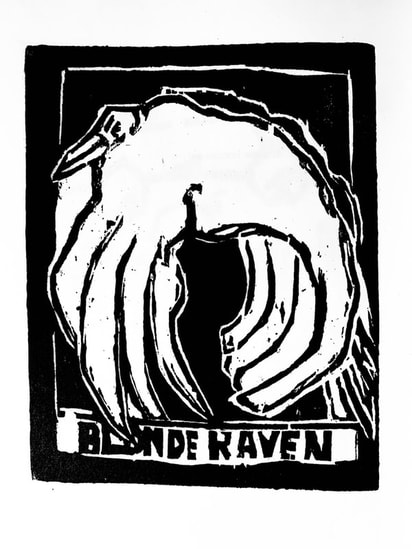 These stark woodcuts might seem at first to render animals in “black and white,” essentializing their basic contours, but in fact the high contrast design demands more of the reader, who must learn to parse these images because their figures don’t always readily come into view. Some of the animals are, in fact, hidden by bars, like the spider monkeys at the zoo, while others blend into their surroundings to create new abstractions, like the hummingbird, wings spread against a white background within a dark ground, which begins to look like a mask the longer one stares. Carr’s woodcuts invite inspection, much as Schwartz’s poems refuse containment and essentialism, revealing the animals they describe by also revealing us to ourselves. Together, the poems and woodcuts nuance what it means to see and be seen.

This tendency is on full display in the minimalist poem “Blonde Raven”:

A blonde raven, not driven by rules
Anyone of us can obey or even recognize,
Disrupts the color in everything else.

The koan-like poem, resonating with Stevens’ “Thirteen Ways of Looking at a Blackbird” in both form and subject, sets up a parable by which the rare albino bird radically “disrupts” our encounter with the world. The “blonde raven” changes our eyes, as it were, so that we see color anew. Like the bird, the poem is “driven by rules” imperceptible to the reader, who doesn’t recognize a particular form beyond the tercet. Yet the presence of the blonde raven within it surfaces barely perceptible internal rhyme driven by consonance and paragram, disrupting the color of this black and white text by bringing shades and variations to our eyes. Once named, the raven’s albino feathers seem to rearrange themselves line by line: raven / driven / even / everything. It isn’t simply our idea of ravens this rare bird disrupts, but “everything else.” What we thought we knew about the world becomes unreliable, much as this book and other works of critical animal theory and posthumanism demand we question what we think we understand of animals and decenter human experience from our relation to the world. “[N]ot driven by rules” we can perceive, the blonde raven itself becomes the ruler by which everything else is measured.

Lighthearted and lovely in its ecopoetic enquiry, Salamander: A Bestiary pairs image and text acknowledging the imperfection of these mirrors. As Schwartz writes in his preface, “the animals always seem to elude us, no matter how much we either highlight or deny the presence of the animal in our own affairs.” Through lively illustration and linguistically playful text, Schwartz and Carr make space for animal evasion that reveals even as it conceals. In this game of capture and release, we get caught as well.